Get an EUR 10 discount on each of the most popular SkyTest® products, by purchasing them through the following links:

If you have any questions regarding our products, please feel free to send us a quick message. 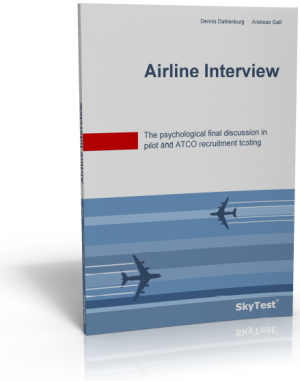 SkyTest® Airline Interview book addresses the theoretical concept that guides every airline interview and offers a look "behind the scenes" of pilot and air traffic controller recruitment.

SYDNEY - The Qantas Group confirmed it will open its Pilot Academy across two locations in regional Australia to meet anticipated pilot demand.

The Academy is part of the Qantas Group’s plans to build a long-term talent pipeline for its airlines and the broader industry to meet the increasing need for skilled aviators. Boeing’s latest estimates show that 790,000 more pilots will be required globally over the next 20 years, around one third of them in Asia Pacific.

Initial plans for the Qantas Group Pilot Academy were announced in February this year and it’s expected the first site will be operational during 2019. Nine regional cities across Australia – Alice Springs, Bendigo, Busselton, Dubbo, Launceston, Mackay, Tamworth, Toowoomba and Wagga Wagga – have been shortlisted. A decision on both sites will be announced in coming weeks, according to Qantas.

Qantas Group CEO Alan Joyce said that initial scoping had shown that two locations would be needed to reach the Academy’s potential. "We’re aiming to train up to 100 pilots in year one but we expect this to grow to as many as 500 a year and that can only be achieved if we have more than one location," Joyce said. (2018/08/24)

SYDNEY - Asia-Pacific faces a shortage of airline pilots. To make matters worse, this is the region where airlines and manufactures expect most demand for cockpit crews throughout the 2020s and beyond. This constellation triggers a new recruitment approach within Qantas: native flight training.

The Australian industry behemoth announced plans to establish a flight school by 2019. The facility will ultimately produce up to 500 airline pilots annually with one fifth of graduates earmarked for direct recruitment into a Qantas Group cockpit.

Qantas will invest 20 million A$ in the venture.

While this sounds like a pragmatic response to pilot shortage, the 500 annual graduates of the Qantas academy will only cover a tiny fraction of pilot demand in Asia-Pacific. According to a recent Boeing estimate, airlines in the region will absorb up to 250,000 new pilots by 2036 - just to support today`s industry growth forecasts. (2018/02/22)